AccessITPlus
The project runs from October 2011 – September 2013. During this time the project partners will update the existing courses and translate them into Albanian, Bosnian and Croatian. The existing Greek, Serbian and Turkish courses will also be updated and retranslated. There will be a publicity campaign in each country after which the courses will be made available to online learners. Those successfully completing the courses will get certificates. In addition pilot digital libraries will be established in Albania, Bosnia and Herzegovina, Republika Srpska Bosnia and Croatia and their content will also be made available through Europeana. The project will also train a core group of staff who will form the nucleus of a centre of competence will be established in each country.

AccessIT will deliver a unique package of practical training and skills development, supported by clear guidance, to enable smaller, local cultural organizations in countries where progress in this area is currently limited, to be able to maximise the opportunities provided by the new technologies (combined with major policy implementations such as the Digital Libraries Initiative) to most effectively deliver and disseminate arts and cultural offerings to the citizens of Europe. It will take into account especially the needs of candidate states for which eligibility for Culture 2007-13 offers an otherwise currently unavailable funding vehicle for this purpose.

Untold Stories: Learning with Digital Stories (2007 – 2009):Untold Stories is a proposal for a multlilateral project under the Grundtvig 2007 call, focusing on the provision by public libraries and museums of informal learning opportunities for migrant communities in specific regions of four countries (Czech Republic, Denmark, Germany and Greece), through shared Digital Storytelling, utilising the potential of new Web 2.0 technologies.

Europeana – EDLnet Thematic Network (2007-2009): The project – the European Digital Library network (EDLnet) – runs for two years, and will develop a prototype that demonstrates proof of concept, bringing together content from some of Europe’s major cultural organisations. The project will be run by The European Library together with the National Library of the Netherlands. Veria Central Public Library has been selected by the consortium to represent Greece in the project.

ENTITLE-Europe’s New Libraries Together In Transversal Learning Environments (2007-2009): The project will identify, describe and disseminate the many instances of good practice, specific services, tools and approaches used for learning in public library settings, building on work conducted under a number of different actions, in order to support the multiplication and mainstreaming of these activities and to enable a fuller understanding of their contribution to Europe’s learning agendas. The project is funded under Grundtvig 2007 and consist of 14 different partners across Europe.

Light: Bring to Light the value of cultural heritage (2004-2006): Light, a 26 month project funded by INTERREG IIICEast was a partnership of five libraries which promoted cultural heritage through a network of museums, archives and cultural sites. Veria Central Public Library was the coordinator of the operation and created an educational digital map of the city’s cultural monuments, with multimedia links to content-some of which were created by children.Read the final report of the project (pdf 914kb)

See photos of the Digital Seminar – Creating a new environment

CALIMERA (2003-2005): Calimera stands for Cultural Applications: Local Institutions Mediating Electronic Resource Access. Perhaps the most important word in this acronym is «LOCAL». Calimera has mobilized local cultural Institutions for a new role in transforming innovating technologies into helpful services for ordinary citizens. Veria Public Library was responsible to develop and manage the web site of the project.

PULMAN & PULMAN XT: (2001-2003)The PULMAN Network of Excellence was launched within the European Commission’s research programme for a User friendly Information Society. PULMAN-XT was established later with the goal of expending the benefits of the PULMAN Network and initiating new activities. In both projects Veria Public Library was responsible for developing and managing the web site.

MOBILE (1993-1995): The first European project in which the Library participated. During that time the first Electronic Book Mobile was developed and investigated the use of electronic material in small remote areas. Read the final report of the project (pdf 430kb) 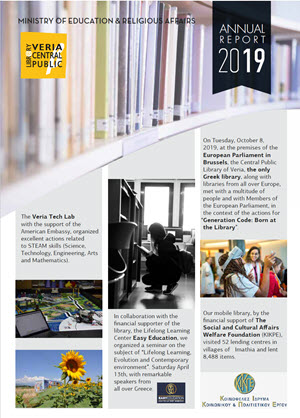